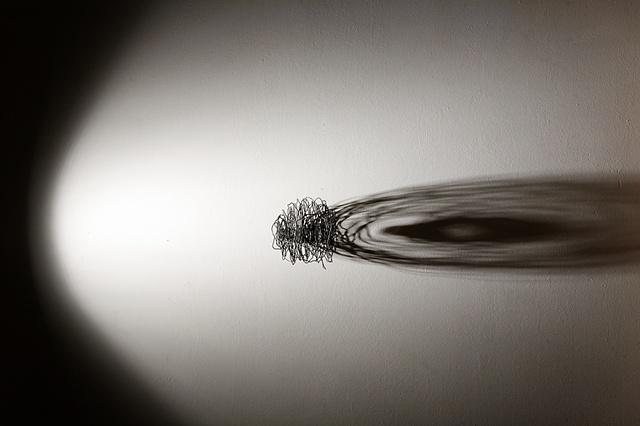 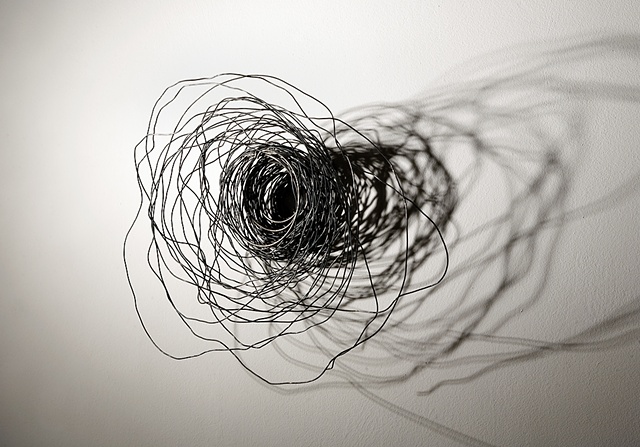 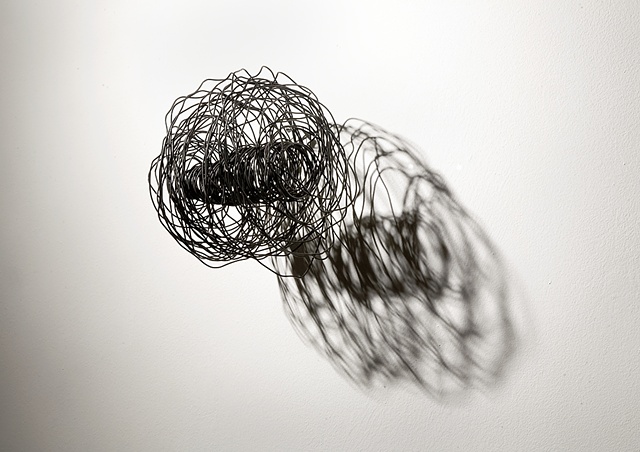 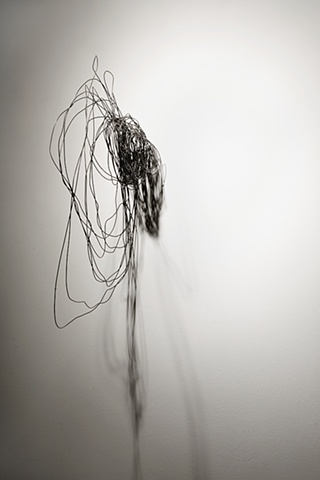 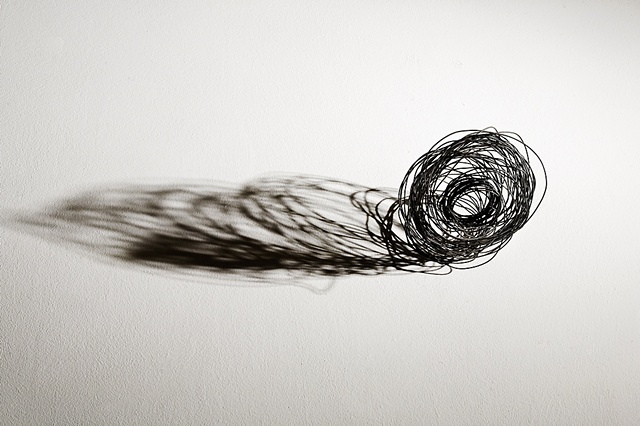 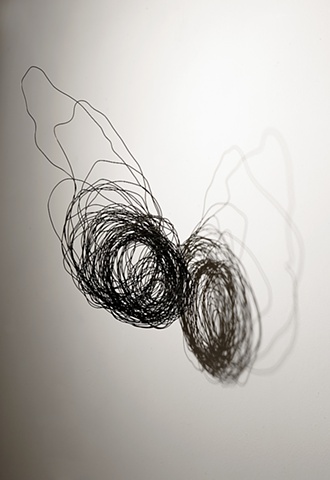 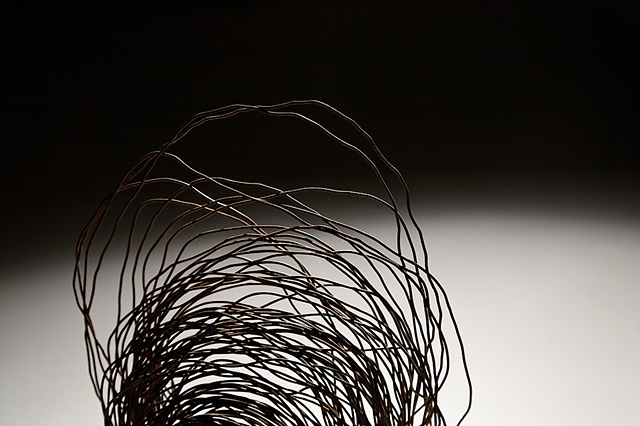 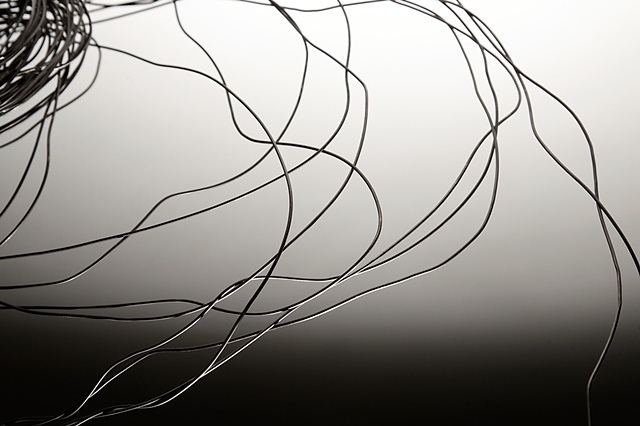 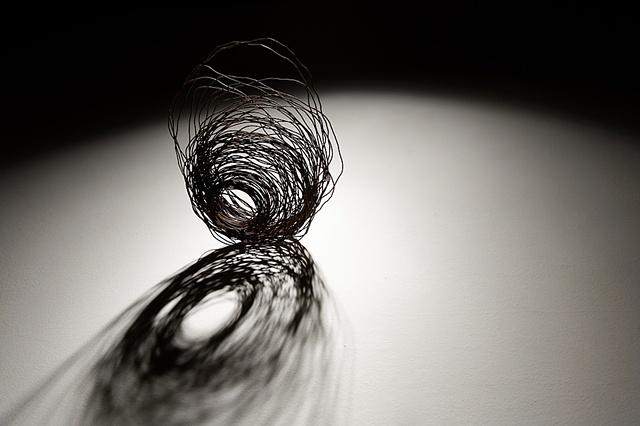 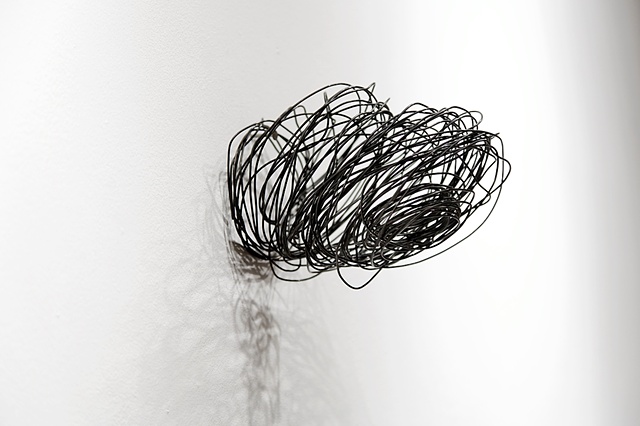 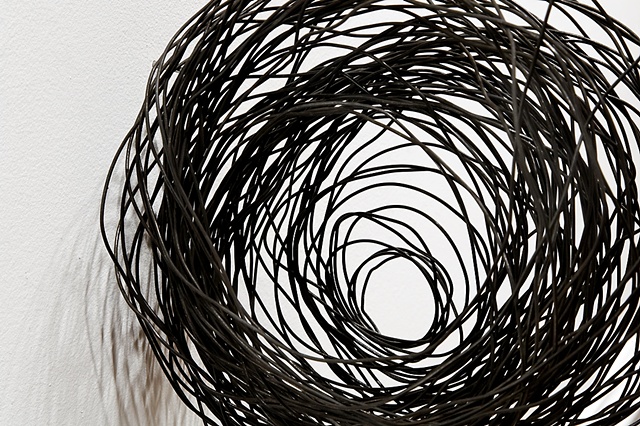 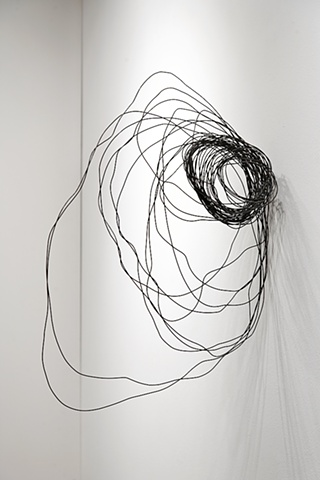 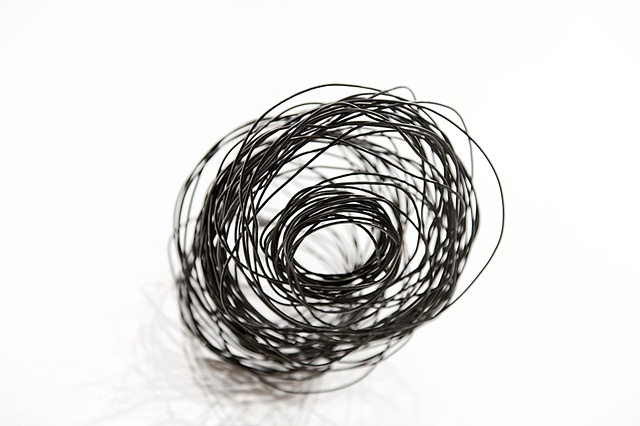 WIRE // 2012 I have been collecting smashed wire for the last 25 or so years. Usually it is a small bit of baling wire that has been tossed aside on a roadway and then run over. I find them on the street, often near work sites. My collecting began when I was a college student, living in a down-on-its-heels San Francisco neighborhood that didn’t get much attention from the city’s street cleaners. The spaghetti-like tangles glimmered at me like treasure in the gutter. “Street drawings,” someone once called them; I nailed them to my walls.

I kept filling my pockets with serendipitous finds as I moved eastward to the Rockies, to ski towns where construction was big business and one could find the wires if you kept ahead of the more ambitious street departments. A sabbatical in Mexico rekindled my interest and multiplied my collection. There, improvisation and resourcefulness are prized skills and so baling wire, the instrument of the jury-rigger, abounds. And the trash truck doesn’t come around much.

When I first started making art, I incorporated these wires into my encaustic collages. I came to realize that one of the qualities that attracts me to the wires is their representation of a single moment. First tossed, then smashed, they mark time: the otherwise unexceptional second when their identity changes from being valuable to disposable — at least in the eyes of someone who uses the wire as a means to an end. On the other hand, I find life and inspiration in them, so in that instant of smashing they become a useful tool for my imagination.

Until recently, I didn’t ask why I collected them. Beauty was reason enough. Now, they are functional too: they embody the unseen ties that bind. The invisible knots and channels and intertwining and snarls and pathways of human relationships. They are visual symbols of both the physical routes — blood vessels and umbilical cords come to mind — and the emotional conduits that unite us. What shape does the electrical current of love take, I wonder? And the other complicated bonds which hold us together, or keep us at arm’s length — responsibility, history, respect, duty, ego, blood, fear, money, among many others?

The found wires continue to draw me in (and probably always will), but lately, I have been working with raw baling wire and shaping it myself. As in my Hole Series and the sculpture, “Promise,” I usually start with a single length of wire, working it like a pencil line that never leaves the paper. My artmaking is about connection and wire provides the continuity. As for my subject matter, the specific ties of personal relationships have given way to the more general covenants of humanity. I am exploring how technology is prompting social evolution, causing us to adapt the most elemental part of who we are: how we relate to one another. Baling wire, which has held us together since farmers first started mending fences, continues to be the connective thread.